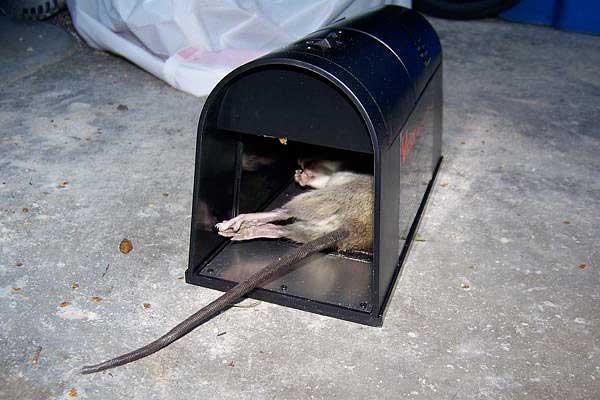 We had a rodent in the kitchen. I finally figured this out after finding nibbled apple’s dragged to the edge of the kitchen at the stove. I was not entirely sure if it was a rat or a mouse, and so was unsure of what rat trap to get.

And so I resolved myself to ridding the house of these vermin. I hate poisons, since we have children, cats and a dog. And the traditional mice and rat traps very often miss and catch only a foot or tail which seems awfully cruel to these rodents. Glue traps are just wicked in concept and usage and seem to be designed for torture of the mouse or rat. So, the question is how to catch a rat with a trap, kill it humanely, and rid my house of rats and mice forever. And finally which is the best rat trap?

So I looked at the electronic traps which are supposed to quickly and humanely kill a rodent. Trouble is they are expensive, and the only electronic mouse and rat traps my local Home Depot and Lowe’s carry are the Victor model 240 Rat and Mouse Traps. Traditional spring traps, glue traps and poison are available in great abundance. There even seem to be a lot of those ultra-sonic traps which are supposed to repel mice, rats and even bugs. Right… and I have some snake bite elixir for sale.

Bit the bullet and bought the Victor Electronic Pest Trap, and that night, I baited it up with the recommended peanut butter. First I had to load it up with two C batteries. The battery compartment required a screwdriver to pry off, and the battery holder required a screwdriver to insert the batteries in the Victor’s battery holder. Not a good start.

After baiting the electronic rat trap, I turned on the Victor, and was immediately shocked, and I almost hurled that &*^%$#! Victor Mouse and Rat killing machine across the room. But I decided to give it one more try.

Placed the Rat Killing Machine next to the dog bowl, and went to bed. In the morning I found an empty electronic rodent trap and no dead mouse or rat. Hmmmm.

Tried re-baiting the Victor again the next night, and this time with a tasty morsel of smoked Tuna and nothing took the bait or got electrocuted by the Victor. No bait taken. No dead mouse or rat, and no flashing light on the Victor Electronic Rat and Mouse Trap that indicates a killing or tripping of the electronic circuit.

Tried re-baiting the Victor Trap again the next night, only I put it in the Garage next to the kitchen door. Next morning I was rewarded with one small dead and electrocuted RAT! Cool.

Going to use the Victor Mouse Trap a while longer and see if there are any more issues. I’ll review the Victor Electronic Trap after extended use, and report back my findings.

UPDATE: Rat number two has been dispatched by the Victor Electronic Rat Trap. 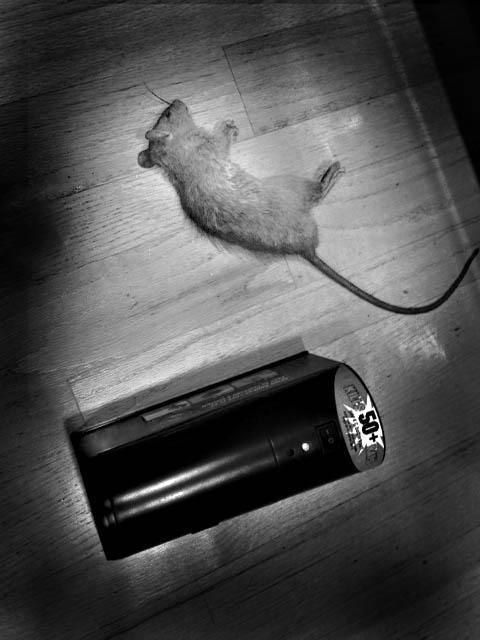 UPDATE: Rat number three has NOT been killed by the trap. Instead it appears it was shocked non-stop for at least 15 minutes. When I made my way to the trap and dumped the Rat I thought maybe it was still moving. But creeped out, I took it outside and put into the garbage can. Next morning I went out and checked on the Rat number three, and found it alive and well. I ended up killing it with a shovel, and now I have that memory of it squealing as I killed it. Damnit.

I am finding that there are issues with this trap.

Given the last experience, the shock I got, and the other poor design features of the trap, I DO NOT Recommend this Victor Electronic Trap. I am going to try and get a complete refund on this poorly designed product that is supposed to kill rodents. My Victor M240 Electronic Mouse Trap Review really tested my patience, and humane sensibilities.

Update: I continue to use the Victor Rodent Trap and have killed two mice in the past couple weeks in the garage. I did however spot a rat who did not venture into the trap. The rats seem to be getting a tiny bit smarter, and can’t be coaxed into the trap for the peanut butter, dog food, or my latest offering of a nice chunk of country ham. I fear that the electronic mouse trap is getting built up with the smell of dead rodent, and is helping the rats figure out that this is not a good place to go. Of course Victor did not make it at all easy to clean this thing. It does not come apart, nor is it convenient to stick your hands inside to clean. There is a lot of room for improvement here. Victor, are you listening?

Another update. The Mouse and Rodent trap has killed four more mice, and another rat. Today there were two very dead mice in the trap. I’ve not gotten shocked again, but I will say that I only turn it on when it is flat on the ground, and then I flip the switch without touching anything else on the Victor Trap. I’ve learned my lesson. The rodents however, have not. Sure am glad I’m zapping them in the garage before they make in the house.

UPDATE: 6/13/2012
Rats in the chicken run and chicken coop
I am not at all happy, and at least one chicken is not at all happy when the lights go out. She squawks her warning squawk to the other chickens, to us and to the neighbors that something is very wrong and dangerous! I go out at 3am to see what in the heck is the matter. Turns out rodents are visiting my chicken run. I saw a mouse and I saw a rat. The girls aren’t cleaning up after themselves I guess.

So I dusted off the Victor Electronic Rat Trap, and baited it with a chunk of peanut butter and jam sandwich, and a few pieces of dry dog food and place the Victor Electronic Mouse Trap along the wall I saw the rat. Rats run around the peripheral walls of a room or a building, and you will usually have best success using any kind of rat and mouse trap by putting it next to the wall. Turned it on, and locked up the chickens and went to bed.

Next morning the blinking light was blinking, indicating I had caught and killed a rat or mouse in the Victor Rat Trap. Well upon inspection I see that I did not get a rat, or a mouse, and the bait was gone. I assume the batteries are too low, or we had a super rat trip the trap. The Victor Rat Zapper did not work.

I’m annoyed once again. Are the batteries shot? Is the mouse trap not working as it should? You’d think that a Rat Zapper such as the Victor Rodent Trap would do a better job, have a battery indicator, and have the power to zap a rat.

Well, I ended buying another electronic rat trap and have done a Review of the Rat Zapper

Get a great deal on a Victor Electronic Rat Trap at Amazon.

And another rat falls to the Victor Electronic Rat Trap.

We live close to open grasslands, and as a result can have a rather unsettling rodent population. The Owls and...

Victor Electronic Rat Trap – Suitability for Squirrels Something or some critter has been chewing on the painted cedar paneling...

Rat Zapper Review Decided to get another electronic rat and mouse trap since fall is here and winter rains are...