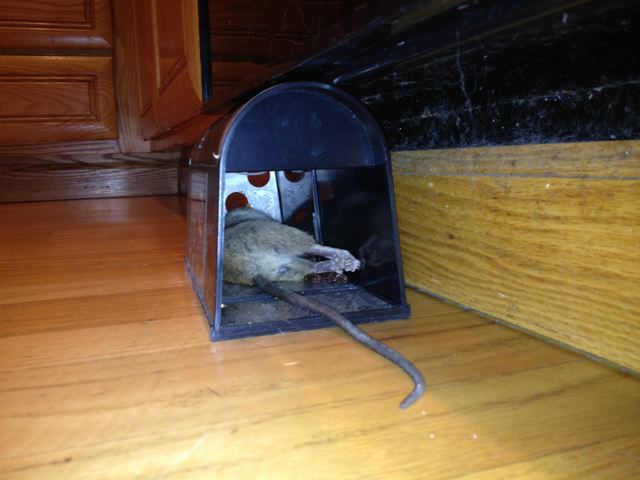 I have changed my opinion on the Victor electronic mouse trap. I have caught about half a dozen rats, and perhaps a dozen mice, or baby rats since I started using this high tech mouse trap. It zaps the mice and rats quite well most of the time. Occasionally a larger rat will survive, and only be stunned, but this appears to be an anomaly. And yes I did get a bit of a shock the first time I used it, but it was a mild shock, and now I know to hold the trap only by the plastic parts, and to not handle the trap while it is energized.

I have experimented quite a bit with various baits to use in the Victor Mouse Trap. Peanut butter is the tried and true bait that mostly works. Sometimes the rodents don’t seem quite so interested in the peanut butter, and so I will use bits of cooked or not cooked meat, including chicken, beef and fresh tuna. I have also used smoked tuna, chicken scratch, bread, cheese, fruit including apples and pears. One particular week I knew we had a rodent, as the dog and the cats all were interested in something under the stove. Nothing seemed to lure the rodent out though. Finally I spied some raisins on the floor that kids had dropped, thought to myself, I’ll bet these work. Tried it and that night I scored with a fresh kill.

I still have a gripe that the victor rodent trap is not easy to clean, and so I reach out to Victor to improve their design so that it is easy to clean the trap. And also to improve on the electronics by having an internal battery indicator to let you know when the batteries are low, and to make it impossible or at the very least difficult for humans to get shocked.

The Victor Trap is not perfect, but it mostly works, and works exceptionally well for smaller mice and rats.

Get a great deal on a Victor Electronic Rat Trap at Amazon.

We had a rodent in the kitchen. I finally figured this out after finding nibbled apple’s dragged to the edge...

I am overrun with mice this rainy winter. The chickens make a fuss as the varmints run from end to...

Rat Zapper Review Decided to get another electronic rat and mouse trap since fall is here and winter rains are...