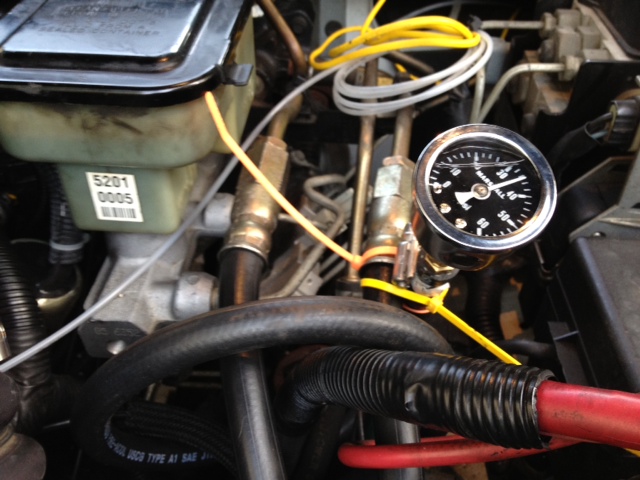 My Dodge truck has had a few fuel related issues over the past year and half I’ve owned the truck. Some of these issues were related to a bad mechanical fuel pump that was putting out less and less fuel pressure, and one of the issues was directly related to a bad batch of BioDiesel, and yet another was related to fungus in the fuel that the previous owner had suffered from. To help diagnose these issues, and determine if and when I was having fuel pressure issues, I decided to install a fuel pressure gauge. I also went to my favorite Diesel Forum to ask for help in getting some answers.

In the cab electronic gauges are very expensive, and I couldn’t see dropping over $200 for the occasional diagnosis of fuel pressure problems. Mechanical gauges are much more affordable, but I would not run fuel inside of the cab of my truck. The answer turned out to be installing a mechanical fuel gauge in the engine compartment and taking an occasional gander at the gauge to make sure it wasn’t past time to change out a filter, or to diagnose another problem.

Looked around and found Marshall made just the gauge I was looking for. And it was pretty cheap at under $30, but looks to be of very nice quality, complete with being filled with silicone to protect the gauge against wild swings in pressure. Folks on several diesel forums recommended the gauges, and so I ordered one up. I hooked it up along with a TorkTek snubber at the Injection Pump, where the fuel enters at a banjo. The snubber is supposed to reduce the pulsing of the fuel from the mechanical pump, and to prevent destroying mechanical fuel gauges. From there I attached a grease gun hose that was about 15″ long, and then to a 1/8″ female pipe thread adapter, and then to the gauge. I hung the gauge from a rubber hose using two zip ties, to reduce any vibration from the engine. This seemed to work although the needle of the gauge swung 5-10 psi on either side of the target pressure. The snubber was obviously not snubbing the pressure quite enough.

Left the gauge on the truck and couple months later the gauge failed. Most of the silicone leaked out of the gauge, and of course the swinging of the needle was even more erratic. Returned this gauge to the place I bought it from and they sent me a new one. Installed this gauge, and in a few more months I trashed this one also, only this time the truck blew out the rubber plug at the gauge, and broke the needle. I think the plug went first, and then the needle just beat itself to death from the wildly fluctuating fuel pressure.

Contacted Marshall and they kindly replaced the gauge. In hindsight I think they went above and beyond the call of customer service on this one. The wildly fluctuating fuel pressure of my Cummins was just too much for any mechanical fuel pressure gauge with my set up. And I also wonder about the effect of Biodiesel on the rubber seals of the gauge. The literature makes no mention of using Biodiesel. Biodiesel is hard on some rubber parts and so I think it’s reasonable to think maybe a gauge directly exposed to Biodiesel will eventually fail due to swelling or softening of the rubber.

This time at the recommendation of Rob at TorkTek, I used a 30″ or so piece of marine grade fuel line instead of the shorter grease gun hose. And I used some parts left over from a Turbo Waste Gate project.

After installing all of this and sealing all threads with Permatex #2 sealer, I started up the truck, and got a non-fluctuating 20psi. Adjusted the TorkTek OverFlow Valve I have on the Injection Pump so I ended up with a non-fluctuating 35psi. Fantastic! No more gauge getting beat to death from fluctuating fuel pressure.

My truck smells like french fries. I use B100 BioDiesel in my 97 Dodge Ram Turbo Diesel, and it loves...

Keeping Track of the Important Stuff That We Love

Keeping track of the important stuff that we love can be a daunting process. And so I generally keep links...