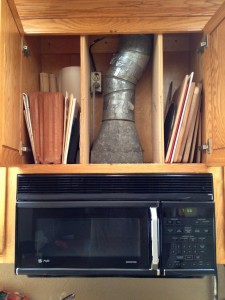 This is a review of the Bluestar RCS 30 Gas Range starting from contemplation and continuing through the unpacking and installation of the BlueStar. We’ll finish up the review by using the RCS30 and reporting on the good and negative aspects of this commercial style range for the home.

The old GE Signature Gas Range and above range microwave were showing their age. The Microwave worked 2/3 of the time, and the GE Signature Range worked some of the time. It was on it’s second (rebuilt) computer, and we were not about to drop another $350 on a reconditioned logic board. And so we started the search for a new Gas Range and Microwave.

We looked at the offerings from Home Depot and Lowes, and after a lot of hand ringing thought we wanted the LG Gas Range model LDG3036ST. It was LG’s top of the line range, and it looked pretty fancy with it’s pseudo Pro-Gas range styling.

No Computer to Fail

One thing bothered me though and that was the heavy reliance on a computer to run things on the stove. I’m tired of the computerized GE Signature, and the computerized Amana Downdraft Model AGDS902SS Gas Range at my old house. The Amana had a failed computer, as well as constant problems with ignitors both on the cook top, and in the oven. Both computerized ranges required too much investment after the fact. And to add insult to injury new computer parts / logic boards were no longer available. Only “refurbished – failed?” boards were available at a premium price. Having taken both of these ranges apart, I can tell you that it’s no picnic. The Amana in particular was a royal pain to remove so many parts to finally get down to the failed computer. And both stoves had the flimsiest of sheet metal. Take a screw off and good chance that the threads on the stove were now stripped.

And so we contemplated looking for a completely manually controlled gas range. The microwave became a secondary consideration. The box stores all seemed to offer only computerized gas ranges, unless you wanted only a low end apartment type range.

After much research we looked at pro-style gas ranges for the home from GE, Wolf, and BlueStar, as well as a few others. I recalled a gas range we had in San Francisco that was a 50’s vintage gas range, and how it’s open burner architecture lended itself to easy maintenance and bullet proof reliability.

The BlueStar seemed as though it were built like that old 50’s tank. So we read a lot of reviews so as to understand the good and not so good features. I’d rather know about the good stuff and the warts up front, just so there are no surprises.

BlueStar has the option of several models, the RCS and RNB models in a standard 30″ configuration seemed to make the most sense. We weren’t remodeling, and the kitchen was already set up for a 30″ range. That’s fine. Bluestar RCS models come with the largest burners rated at 15k BTUs, and the RND models came with the largest burners at 22k BTUs. However there was over a $2,000 premium to get the more powerful burners. It appeared that the RNB’s had the same chassis and ratings as the RCS, and our minds were made up. The RCS model it is.

Looked around in the Bay Area and found a sale price of an RCS 30 for $2499, and other stores selling them for up to $3299. That was quite a range of prices. We paid for the $2499 model over the phone, and ordered a 6″ back splash for the stove since it was going flush against the back wall.

We realized that with a stove this powerful an over the range microwave was not going to cut it. The fans wouldn’t be powerful enough, and we thought that with all that heat, a overhead microwave would fail pretty quickly. So we resolved to get a powerful range hood.

Picked up the range on a Saturday afternoon, and also bought a Elica Range Hood that had two simple controls for fan and lights, commercial style stainless steel traps, and outright simplicity. Right up our alley. Got a good deal at $599 for a 600 CFM commercial looking hood.

The Bluestar took three strong men used to picking up and moving heavy appliances to do the deed of picking up the stove and putting it in the bed of our beater Dodge Dakota. The other two packages, the Bluestar Back Splash, and the Elica Cervinia Range Hood were heavy enough to not require strapping down. Still the Dakota felt underwhelmed by all the new found weight in the bed.

Since it was my wife and myself left to our own devices of unloading the RCS30, I quickly determined that uncrating and removing all loose parts was going to be essential. So the straps were cut, the cardboard box removed and the plastic wrapping was unwound, leaving a naked and minimal looking stainless steel Bluestar Gas Range in the back of the truck. I have to say that I was struck by it’s simple beauty. Stripped down, no computer, no extra doodads or gadgets, no clock, no timer, no gaudy logo. Just a simple but robust cooking tool. COOL!

Then I started removing the burner grates since they being cast iron were sure to weigh a ton. And so they did. And it was a beautiful thing to then see the burners in all their nakedness. I unplugged the burners which required removing one wire each from the ignitors, and then simply lifting up and pulling back the burner to disengage. Those 15k BTU burners are serious business also with a substantial weight and heft and large size. Oven racks came out and another 5 or more pounds.

Next I unbolted the stove from the wooden pallet. This consisted of two bolts going through holes in the rear of the stove to the crate. I was surprised that there weren’t another two in the front. I tested the heft of the stove, and damn near gave myself a hernia. This thing, completely unloaded is HEAVY. While sliding the stove rearward in the truck bed, a nut fell to the bed. Hmmmm. Then I noticed a nail head sticking up from the pallet, which would have done some serious darmage had it made contact with one of the stainless panels. The stainless panels by the way are covered with a plastic film that must be removed before firing up the stove for the first time.

I unburied my furniture dolly from the shop, and had it ready at the rear of the truck for unloading of the stove. Got my wife and we sized up the situation, and quickly decided on a plan. It would require perfect coordination since this was one heavy beast of a gas range to be moving around. On three we lifted, moved the stove away from the bed and over the dolly, paused, and then on three again, used our legs instead of our arms or backs to lower the stove to the dolly. We both stood admiring our work and then realized we both had some heavy dents on our arms, and I had blood drooling down my left arm. That was our first note that the Bluestar comes with some mighty sharp edges on the sheet metal and metal framing and panels. Funny the manual for the stove says that all parts of been deburred. Well… maybe or maybe not is my conclusion.

We moved the stove a few feet and then decided that the best way of getting the stove up the two steps leading into the house as on a hand truck. So I got the Harbor Freight hand truck and we tilted the stove back off the dolly, removed it, and replace the dolly with the hand truck. Tilted it back together and I wheeled it to the steps. Wife lifted on the front while I lifted from the hand truck side, and we quickly made it up both steps, and in the doorway at the front of the house where we have an oversized wheelchair friendly front door.

Getting the Bluestar RCS-30 Ready for Installation

Moved it into the kitchen and went about admiring the Bluestar once again. Removed all the plastic wrap remaining on the stove, and I started to think about a gas line and any other parts we’d need. One thing we discovered behind the old stove was that the gas line appeared to have been added after the fact, and this appeared to be true of the electrical outlet also. This was supported by the fact that a large chunk of wall had been cut out to accommodate these changes. The chunk was held in by one sheet rock screw. Then my wife said, oh no… She discovered that the gas line and electrical outlet were in the wrong place for this sealed back Bluestar. Crap.

Removed the old above range GE Signature Microwave and found the wall behind it having a different color paint. So this got cleaned and painted. Measured and remeasured and finally cutout a paper template for the mounting holes of the Elica Vent, drilled holes and quickly discovered that instead of the anchors they provided that simple wood screws were the better way to go. It would have been nice had the Elica company included a paper or cardboard template in which to drill the mounting holes, as the tolerances allowed little wiggle room. And because the mounting key holes on the vent were at the extreme edges of the vent, it was difficult to drill, and screw in the screws. The keyholes in the vent were not large enough to easily accept the head of the screws, and so I had to drill them out a tiny bit. Finally it was not easy to lift the heavy vent up and get everything aligned. But we did it and tightened the screws down from the inside. Plugged in the Elica Ventilation Hood, and hooked up the vent adapter and hose to the roof ventilation system, and turned it on. Wow! This thing sucks some serious air. Boom!

Reroute Gas Line for the Bluestar

Rerouted the gas line to within a couple inches of the floor, and did the same for the electrical outlet. This required a trip to Lowes. Got all of that done, and then covered up the hole in the wall, taped it, and later my wife painted this area. While we were at it we removed a 30″ section of Corian back trim on the counter top so that the stove could site flush with the wall. Underneath that was another big chunk of wall missing. Patched that, and painted, and finally was ready for the Bluestar Stove.

The Bluestar comes with a power cord that is a 90″ appliance end. This is helpful to give you reasonable clearance at the wall outlet. Bluestar recommends a dedicated circuit that is 15amp (??) UPDATE LATER. Since there is no computer the power is required to light the ignitors on the cooktop portion of the range, as well as in the oven. Power is also required for the convection fan.

One can’t wonder why not have a pilot light system. I’d just as soon have zero electrical hookup. Those ignitors are prone to failure, and at $27 or so a pop, can get expensive pretty quickly. Oven ignitors are usually a bunch more money. Will research to see what the pricing is for this, and see if there are alternatives to Bluestar’s rather inflated prices. 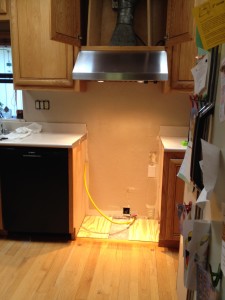 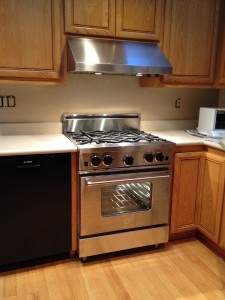 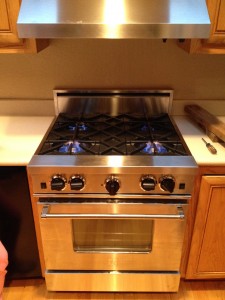