Yep, my 1997 Dodge Ram with what I thought was a trusty Cummins Diesel has done me two disfavors that are going to cost me some bucks. In this case it is the My Killer Dowel Pin misery.

The Killer Dowel Pin is used to hold the Timing Gear Case Housing in place on the crankcase of the 2nd generation Dodge Rams with Cummins 5.9 liter diesel engine. This one is known for backing out and falling into the gears where it either destroys a gear or gears, and other expense engine parts like the camshaft, or it gets thrown into the aluminum case where you end up with cracks or a hole.

If the Killer Dowel Pin strikes and you break a case, then it’s going to cast around $300 for parts, and a lot of labor to disassemble the front of the truck so you can then pull the camshaft out and install the case, and retime the engine. 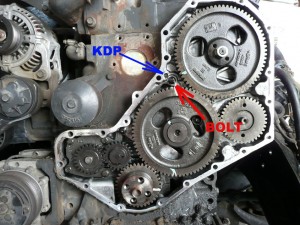 Some people get lucky and never have a problem with the KDP, others have severe engine damage, and some people get cracks or holes in the case, and others just end up with a KDP in their oil pan. I have a cracked case.

Another thing that just cost me a bunch of money is a shrinking exhaust manifold header. Yep, cast iron and they all end up shrinking, and sometimes they shrink so much they crack the header bolt tabs. Yep, mine cracked not one but three of these tabs, and this requires a new head. That’s about another $500 if you buy a cheap Chinese head. If though you already have a lot expensive upgrades you’ll probably want a new high performance head with 60lb exhaust valve springs and maybe some mild porting etc. That’s more money.

And by the time they pull out the camshaft, another $500 for a high performance cam will seem relatively cheap.

It’s enough to make you cry.