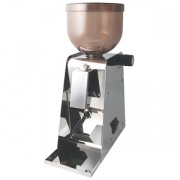 After buying a Breville BCG450XL Conical Burr Grinder to grind coffee for my family’s Miss Silvia Espresso Machine, and finding out that it did not grind as advertised, I returned it to the store. I replaced this crummy grinder with a Le’Lit pl53 Espresso Burr Grinder.

I chose the Le’Lit pl53 Espresso Burr Grinder because of the good reviews and the price point. Mind you, at $230 + I don’t think this grinder is a cheap grinder, but compared to $300-$400-$600 Grinders I saw Coffee and Espresso Addicts using, I thought it might work.

Ordered the Le’Lit from 1st Line Equipment. There was a sale and free shipping which sweetened the deal. Got the grinder and filled it up with some stale beans I had laying around to try it out and to flush away any manufacturing crud. From the factory the grind was beyond even Turkish grind and it immediately choked Miss Silvia. After a bunch of shots I finally dialed it in to beyond 25 turns backed off. Replaced the stale beans with some fresh Mistral Espresso beans from Moschetti Coffee Roasters and set about to fine tune the amazingly infinitely adjustable grind of the Le’Lit.

Shortly I was pulling the best espresso shots I’d ever pulled. I was in hog heaven.

Since getting the Le’Lit I’ve gone through probably 15 or 20 pounds of various coffee roasts. While the grinder does a good job of grinding mostly clump free and very light and fluffy grounds it does have issues.

The first is the grinder is loud. The metal casing obviously contributes to the noise level since the stainless panels rattle and vibrate while grinding. My wife has moved my grinding facilities to the laundry room where I can close the door to grind coffee.

The second issue is that the plastic hopper broke after a couple months of use. Turns out that the metal surrounding the entrance hole for the hopper has a burr that slowly but surely scratches a line around the hopper mouth. Eventually the plastic mouth breaks off. 1st line promptly and cheerfully replaced the hopper under warranty. The service at 1st Line is very excellent.

The third issue is that the Le’Lit does not like oily beans. They quickly jam up and the grinder makes that runaway sound of an engine suddenly losing load. It’s annoying since you have rattle the grinder around and sometimes poke a bamboo skewer in the hopper to get the beans moving. This one issue is going to make me get rid of this grinder. It’s too much of a chore.

The fourth issue is that the parts of the Le’Lit do not fit all that well. This becomes very apparent as you take the grinder apart to clean it. The spout requires much effort to remove the thumb screw, and even more effort to replace it. The holes do not properly line up. This is also true with other stainless steel panels of the grinder. I’m contemplating replacing the side panels with some wood to quiet the grinder down and to get better fitment.

In the end I’m not sure I can recommend the Le’Lit pl53 Espresso Burr Grinder. If you need to get an infinitely adjustable coffee grinder that is reasonably inexpensive, that will grind fine enough for espresso, and you can deal with the noisy nature of the beast and its seemingly inability to handle oily coffee beans, then perhaps it will work for you.

Several years ago I visited Fabrice Moschetti at his place of business in Vallejo, CA (an ex-military town in the...

Went by Fabrice Moschetti’s NorCal Coffee Roasting Business on Saturday and got to shoot the breeze with Fabrice, and taste...

A Visit with Moschetti Coffee