At long last I have a Cummins diesel powered Dodge Ram for hauling my boat. There’s a magical sound these diesels make that gives me goose bumps and makes me smile long after I’ve climbed down from the driver’s seat. 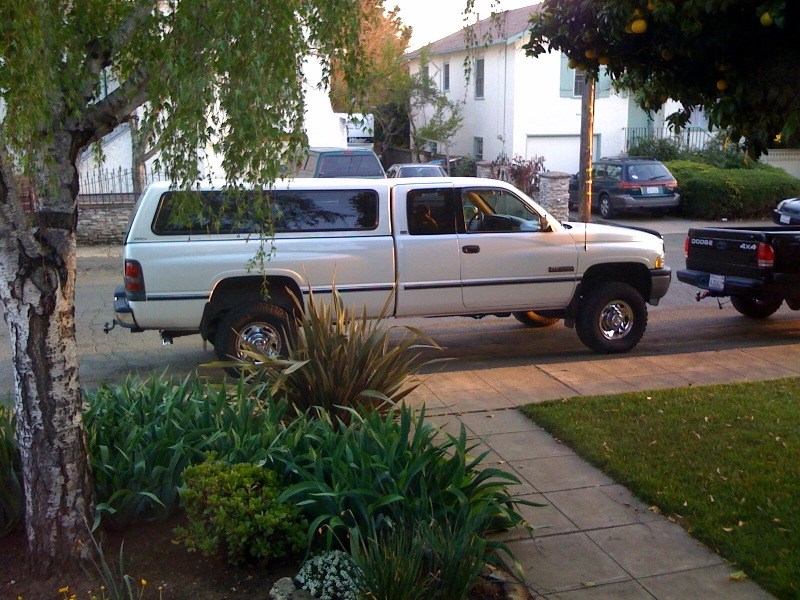 I’ve been looking at these trucks for quite a while now and lusting after them. But I’ve found it difficult to justify spending a wad money on a new or newish used one, since the truck will primarily be used to towing my 22′ Tolman Skiff Jumbo (a wooden boat). The old 2000 Dakota towed the boat fine with it’s 4.7 liter V-8, but it tended to get pushed around by the boat. And long runs up the hills in the heat of summer tended to tax the Dakota.

And so I looked for a truck. Then my friend Bruce A. in Santa Barbara said he had a buddy, Bill, who was thinking of selling his 97 Ram CTD (Cummins Turbo Diesel). He thought about it for over a year, but finally agreed that once he had a new replacement vehicle, he’d sell it to me. At times it seemed like the Cummins Gods were trying to keep the truck in Bill’s driveway. But finally everything came together, and I bought a plane ticket, shortly thereafter flew out of Sacramento and landed in sunny Santa Barbara. Picked up the truck, and headed back to Northern California. I attempted to stay in the sweet spot of 60mph for the 300 mile trip home, but after an hour I got bored and sped up to 65mph. And once I got close to San Jose, I sped up to 70mph.

This is a big and heavy truck with lots of windage. And yet I still managed to get 18 mpg. The Dakota on the other hand would have been hard pressed to get 15-16mpg, and it’s half the weight and has half the towing capacity.

This is a 1997 California Dodge Ram 2500 (3/4 ton) 4×4 truck with automatic transmission, Club Cab, and 8 foot bed. It’s big, and it’s long. The truck came with a camper shell, Goodyear BFG tires, and Edelbrock shocks. Other than this the truck is stock. The truck has 180,000 miles on which sounds high, but for a Cummins diesel this is actually low miles. I think Cummins claims these motors on average will go 350k miles before requiring overhaul. Many folks who take good care of these motors see 500k, 750k, and even 1million miles. This truck came with all the maintenance records and it’s clear it’s been well taken care of.

As I drive the truck I find a few irritating things. Number one is this truck suffers from a wandering, less than precise steering. At one point in it’s life it had the front end completely rebuilt. That was perhaps 80k miles ago, and it’s obvious it needs attention again. It’s also on it’s third set of shocks, and so far has seen a seen a set of Rancho shocks and now the current Edelbrock shocks. I think they’ve seen better days also. I’m sitting on the fence as to what shocks to get next. I’ve had KYB’s on my old Chrysler, and on the Dakota, and they gave new surefooted feeling to both vehicles. The ride is not so comfortable though. The Dakota actually felt like a truck after installation of KYBs. Before this it had a rather squishy or flabby ride. The Ram has a rough 3/4 truck ride but still feels a bit skittish with the wonky front end, and questionable shocks. When I picked up the truck it felt as though it had pillows on all four tires. I found tire inflation to be around 50-55psi. Max inflation on these D rated tires to be 65psi. The stock tires on a Ram are E rated tires and typically use 80psi in the rears and 65psi in the fronts. Big difference. I inflated the tires to 61psi and the truck no longer feels squishy, but it still feels like it needs suspension help.

The California model of this truck is different in that it has an EGR valve, and a catalytic converter to meet California emissions. While the EGR may mean cleaner emissions, the trade off is lower diesel mileage, and introducing soot into the engine. The Catalytic converters on these trucks are known to get clogged up with age, and I wonder how clogged up it is on a truck with 180k on the odometer. I’m thinking of going to a muffler shop and having this removed for inspection. I want to be a good citizen and keep the truck emissions down as designed by Cummins and Dodge, but at some point you have to consider that the trade offs might not balance out. At the same time I’m contemplating the EGR and Catalytic Converter I’m also looking for a steady source of bio diesel, which in my mind counters removal of any emissions equipment. Maybe I’m wrong.

Update: I changed out the Edelbrock shocks with a set of Bilsteins. It turned into over day of wrenching to get the old ones off and the new ones on. Problem number one is that the mechanic who installed the Edelbrock’s must have used an air gun to tighten the bolts. I used a 26″ x 1/2″ breaker bar to loosen the rear shocks and I needed both legs pushing on the breaker bar to finally break them loose. Finally got them off, and then found that it was impossible to install the new shocks because the old mounts had been crushed by the extreme tightening, and I also, found that the mounts on the shocks themselves had been ground down to fit the crushed mounts. I ended up beating the hell out of mounts on the truck with a 5lb sledge hammer to open them up. What a pain. All bolts got a liberal coating of anti-seize to help then next person who changes out shocks.

Up next were the front shocks. These were overtightened as well, but the persuasion bar worked fine here. The top mounts were fun because the two nuts on the passenger side were cross threaded. Joy. The driver’s side wasn’t so bad for the nuts, but there wasn’t much room to use a wrench. Ended up buying some crummy Harbor Freight ratcheting box wrenches. Sigh. Wonder how long they’ll last.

Installing the front shocks were just as painful for the bottom mounts since they too were crushed, and the lower mounts on the shocks themselves had been pretty severely ground down to fit in. I beat on the mounts forever and tried using a big pry bar to spread them. Finally gave up and took a large bastard file to the mounts on the shocks and took off a little bit of steel. They dropped right in and I was on the final journey to finishing the shocks.

While laying under the truck smashing the mounts with Thor’s hammer, and finally my hand, twice, I thought of tool that is a shock mount spreaders I would invent. It would just be a heavy steal bar welded on to a tapered piece of steal that would be just slightly wider than the spec’d mount inner dimensions. You’d just stick it in the mount and the tapered end would guide the tool in. After reaching resistance you’d just hammer the tool in the rest of the way, and then put a wrench on the tool to turn it and help break it lose. A more sophisticated version would have an expandable mount expander. You tighten up a bolt to spread the mount, and loosen to retract the tool.

Up next: Upper and lower ball joints. I’ve decided to let my mechanic friend, Dario, take the truck to his work place and have him to the ball joints. I’m tired of hurting myself with big hammers. When he’s done with the truck then I’ll be doing the rest of the front end. This will involve using Luke’s Links to repair the TrackBar, Tie Rod ends etc. It’s the least I can do, as I bond with my large white Dodge with the mighty Cummins Turbo Diesel.

Near future: My first trip to Lake Berryessa of the year and the first official towing job for the Dodge found me fearing that we might not make it back home. Crawling up the hills on the approach to the lake, the transmission, with overdrive off, would shift from what I think was 2nd to 3rd, and then make a rather unsettling grinding noise. This was after the shift, and while under power and still climbing. I think it slipped a bit also. Several weeks before, when I wasn’t towing but while I was climbing a really tight and steep road in Santa Rosa, I heard a similar sound and felt slippage. I thought at the time that the rear tires were breaking lose. But now I’m not so sure. And so I think that the good folks at LeftCoastDiesel.com will be getting a visit from me. They have a good reputation for building some super heavy duty Dodge transmissions to handle enormous amounts of horsepower. And who knows, perhaps I’ll have them breath on the mighty Cummins and coax some more horsepower and torque to help me on the towing climbs I plan on making to Lake Tahoe, Lake Berryessa and beyond.

Recently Left Coast Diesel announced that not only can us Dodge, Ford and GM Diesel light truck owners get service...

My Dodge truck has had a few fuel related issues over the past year and half I’ve owned the truck....