Went to this little french bistro/jazz club and had a Croque Madame – ham sandwich on crunchy bread, melted gruyere, dijon mustard and covered with bÃ©chamel.

Bread wasn’t crunchy, had one very thin slice of ham, no mustard, and the bread was not toasted. Tasted like it was made yesterday and left on a plate in the fridge. I could have given Gordon Ramsey a run for his money on critiquing that limp, insipid and soggy poor excuse for a sandwich. 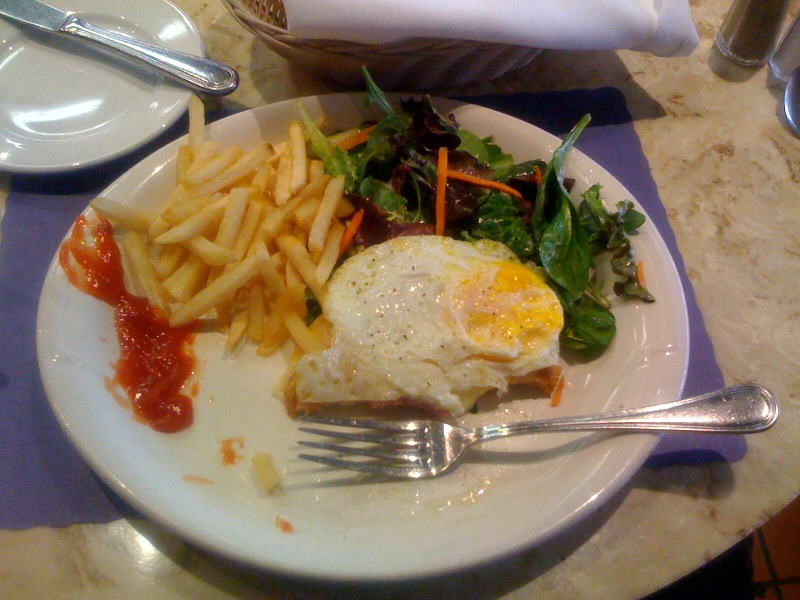 I’ve passed by that place a hundred times and wanted to try this Croque Madamesandwich. Only, the price is normally $13.95, and up to now I just keep on going by. Today they had a $9.95 special for the Croque Madame, fries and salad. There were three tables filled in the place, and now I know why.

This is what it should have looked like (my own version of the Croque Monsieur): 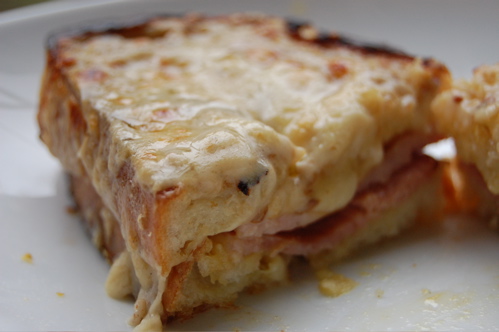 Slice up the ham and quickly cook it in a hot frying pan to caramelize the sugars and fat. Set aside. ()

Make a BÃ©chamel Sauce by melting one tablespoon of butter and adding two tablespoons of flour. Whisk until it is just cooked. Add a cup of scalding milk and whisk it together slowly. Cook slowly until thickened. Turn off the heat. Add half a cup or so of GruyÃ¨re cheese and stir until it is melted. Now it’s a Mornay Sauce. Add salt and pepper and grated fresh nutmeg to taste.

Take two slices of bread and butter one side of each. On the other side of each smear on a good helping of French Honey Dijon Mustard. Grate a good helping of GruyÃ¨re to each slice of bread on the mustard side. Pile on the ham and close up the sandwich. Grill it in an iron skillet until each side is brown and crunchy.

Now have a seat, and pour yourself a nice glass of wine, or a cold super hoppy double IPA, and savor each and every bite of your Croque Monsieur. All that work was worth it, no?