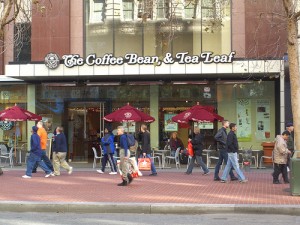 A “small” shot is $1.75 and a “large” shot is $2.25. I decided to see what they could do with a “small” shot. As is my usual habit, I planted myself in a place where I could watch the barista do her thing. She loaded up the portafilter with a mound of already ground coffee from the grinder’s doser. Then she didn’t bother to tamp the coffee and just stuffed the portafilter into the Cimbali Espresso Machine. A paper cup was placed on one side of the dual spout portafilter and a shot glass was placed on the other side. The shot was poured and it was all of a 5 second shot. The paper cup was handed to me, and the shot glass was unceremoniously dumped.

I opened the lid of the cup and stared at a watery bit of espresso that had almost zero crema. I took a whiff and the espresso had little aroma, and the taste was bitter, and little coffee flavor. There was zero body to the espresso and no-silky texture. One sip and I threw away the cup with the remaining espresso. It was a crappy experience and I’ll not buy another cup of coffee or espresso.

The curious thing to me is that there’s always a crowd there, and I see folks who are regulars, and I wonder why.

Don’t bother getting a shot of espresso from the Coffee Bean and Tea Leaf. They have no interest in quality coffee. It is obviously not fresh, since there is no crema, and I don’t think the baristas are up to the challenge of pulling a decent shot.

On an espresso rating scale of 1-5, they get a 1. Poor taste, poor execution.

Stopped by to visit Fabrice Moschetti hoping to catch him roasting a new delicious batch of fresh coffee at the...

Too hot so here’s an ice coffee recipe

One of the big changes to my espresso habit was purchasing a Naked Portafilter. This is also known as a...