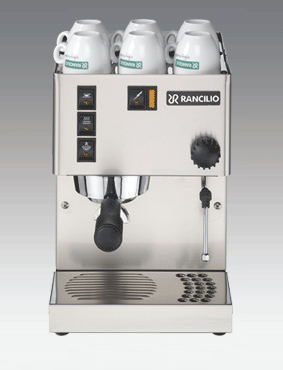 My wife and I used to happily use our rather inexpensive and not terribly sophisticated Krups Espresso machine to make ourselves our morning Lattes. But after years of this indulgence we put the Krups on the shelf. This Christmas I decided to buy my wife a new espresso machine and so I got to work reading reviews. After a lot of hand wringing and head scratching I decided on a Rancilio Miss Silvia. Reason being that there were a huge number of reviews and folks mostly seemed to like the machine, and I found it’s rather plain stainless skin very beautiful, and it’s “marine quality” brass boiler and no-nonsense commercial bits and pieces attractive. Plus I saw that folks hot rodded their Miss Silivias with PID’s, pressure gauges, etc. Any machine that puts up with folks doing heavy modifications and has fans so enamored that they are willing to fiddle away will certainly rise to the top of my list of good things.

And so I ordered the Rancilio, received it from UPS and then wrapped it up and put it under the Xmas Tree in all it’s blinking glittery glory.

I looked into coffee grinders since every single review of the Rancilio Silvia said it was crucial to pair a good grinder with it. Well, folks were saying that you needed some pretty fancy and very expensive grinders. The old whirly gig blade grinder would cut it. And so I poked around, read reviews and settled on a $100 burr grinder from Breville. Took it home, wrapped it up and it joined the Miss Silvia under the tree.

Since we were traveling on Christmas Eve, we decided to open gifts early. And my lovely wife opened her gifts of the Miss Silvia, the Breville Burr Grinder and other assorted coffee related gifts from myself and the kiddlings. We promptly loaded up the grinder and primed Miss Silvia. I fiddled with shot after shot until we had to leave for our Christmas Eve flight. Until we left I was able to pull some watery shots, but when combined with milk were drinkable (barely).

Back from the Christmas celebrations I settled in to experimenting with various coffee beans, tamps, and grinds. I quickly came to the conclusion that the Breville Grinder was not up to the task of grinding coffee suitable for an espresso machine, even though the box advertised as being for espresso, and the instructions had recommended settings for espresso and even Turkish Grinds. I took it back to the store for a refund, and then ordered the Le’Lit PL53, a grinder that good decent reviews and cost around $230. Kind a pricey for a grinder I thought, but I really wanted a decent espresso, like the one I’d tasted at Blue Bottle Cafe in San Francisco.

Finally got the Le’Lit PL53 and put it to work immediately. Out of the box it grinded coffee even finer than a Turkish Grind. It choked Miss Silvia. And after much experimentation I ended up backing off the grind setting about twenty five turns. Finally, a decent grind. And all of a sudden I was getting really nice espresso pulls. About an ounce and half of espresso, for a 25 second pull is what I ended up with and it was dense, and not overwhelmingly bitter or sour like many espressos I’ve had at a lot of cafes. Rather, I was experiencing a chocolaty, sweet, floral dose of caffeine with a creamy mouth feel. Oh what joy!

Around the same time I realized that the Peets Coffee I was getting and other beans I got from the super market just weren’t cutting it. They weren’t as fresh as I desired. Then I recalled that somewhere in my town, someone was roasting coffee. And so I poked around and found that Moschetti Coffee was roasting just a few blocks away from me in Vallejo, CA.

I emailed Fabrice Moschetti asking if he sold retail, and explained I was trying to get fresh espresso beans for my family’s espresso machine. He invited me to stop by and to sample his coffee. I met Fabrice, and he had me sample several different blends. One was his Mistral Espresso Blend and another was a Guatemalan blend. It was amazing to taste espresso shots with such fresh beans. What I experienced, was mountains of Crema and the most amazing floral, sweet, chocolatly flavors I’d yet experienced with an espresso. I was blown away.

And, you couldn’t meet a nicer person and such a passionate expert on coffee roasting, than Fabrice Moschetti. I hung out most of a Saturday afternoon, and was treated to a tour of his facilities, and I got to experience the roasting of a batch of Guatemalan. I went home with several pounds of fresh and amazing coffee.

A few weeks later I’d been to Blue Bottle Cafe in San Francisco, and was raving about their espresso. Fabrice was very interested in sampling the coffee company that has enormous buzz. And so I got a pound of Seventeen Foot Ceiling and brought it over to Fabrice. He closely examined the beans and showed me the almost unroasted beans that had a lot skin left on them. He suspected that this was to create additional crema. Then we settled down to a tasting session with one grinder filled up with Seventeen Foot Ceiling and another grinder filled up with Moschetti Mistral. Shot after shot were pulled and Fabrice’s long time roaster, Mario also stopped in to sample and compare and contrast the Mistral versus the Blue Bottle Seventeen Foot Ceiling. Both had a very pronounced floral quality which Fabrice attributed to the Ethiopian beans. The Mistral Blend features Organic Free Trade coffee beans from Guatemala, Costa Rica, Nicaragua and Ethiopia. While the Seventeen Foot Ceiling was a very rich, bright and big coffee, the Mistral held its own with its rich chocolate and smooth taste and velvety mouth feel and amazing floral quality. I’d put the Mistral up against the Blue Bottle offering any day. I’m amazed that of all the San Francisco Bay Coffee Roasters there are in this neck of the woods, I lucked out and have the top notch Moschetti Espresso Roaster just a few blocks from me. 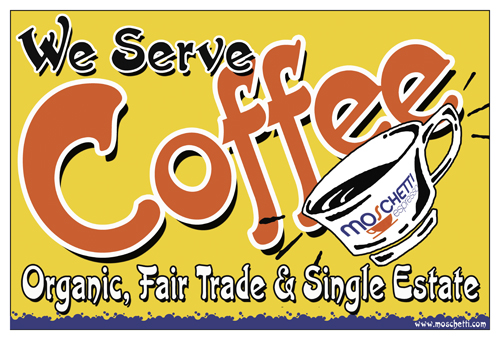 Stopped by Moschetti Espresso the other Saturday during the free tasting, and after hanging out for a while talking politics...

This cafe is next to my work place. I pass by on a daily basis, and I usually don’t stop....

Several years ago I visited Fabrice Moschetti at his place of business in Vallejo, CA (an ex-military town in the...