An Honest Review of the Mazzer Mini Espresso Grinder 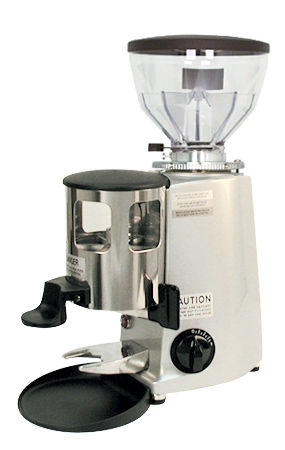 I got sick of my LeLit grinder, with it’s noise and it’s intolerance for darker roasted coffees. And lately I’ve been struggling with clumping coffee and the resulting channeling.

Have been on the lookout for an espresso grinder with more substantial, quieter, and larger burrs. Last week while using http://www.allofcraigs.com/ I came across a used Mazzer Mini way up in Minnesota. It was claimed to have been owned by a church as their decaf grinder in their own little cafe. It was sold as being virtually new. Well, I’ve seen enough “virtually new” things in my life to know not to hold my breath.

A week later the Mazzer Mini arrived and I unpacked it from it’s used fan box. Wrapped in bubble wrap and surrounded in foam peanuts, it survived the trip unharmed, other than a small scratch on one side. My UPS guy made a point of dropping it from about two feet up onto the concrete steps in my house, and then he high tailed it away before I could open the package and check for damage. The box was not in good shape at all.

But I lucked out and the grinder was in fantastic shape! I noticed that while unpacking, it had a major heft to it. The MIni was remarkably clean, though I took a few minutes to wipe everything down. I had a partial and older bag of coffee that I considered beyond it’s useful life to use for dialing in the grinder. I tried the setting the previous owner had, and it was a bit coarse. I ran a shot anyway to test it and of course I had about a five second pull. Way too coarse.

Changed the grind a full two numbers and that was way too far. I fiddled for a while and it turns out this grinder is very sensitive to even slight changes in the grind setting. The LeLit by contrast has a worm gear adjustment that requires a number of turns to make a difference. The Mazzer Mini would be easy to return to a setting since there is a number scale as reference. The LeLit has no scale, and you just turn the knob until you find a setting that works. The LeLit is more adjustable, but if you wanted to grind a coarse drip coffee ground it would be very time consuming to get back to your old grind. The Mazzer will be easy.

After dialing in the Mazzer Mini on old coffee I realized I had nothing to actually drink. So off I went to the NorCal Moschetti Coffee Roaster and picked up a couple bags of coffee to taste. Think I’ll get a bag of Blue Bottle on my way home tonight so I have plenty of coffee to sample in the new grinder.

Have run about two pounds of coffee through the Mazzer Mini, and I have a few observations.

1. The Mazzer Mini is Quiet. The difference in sound volume between the LeLit and the Mazzer is night and day. The LeLit will wake up the neighbors, but the Mazzer is whisper quiet in comparison. The doser is louder than the grinding with it’s thwack, thwack, thwack.

2. The Mazzer takes a bit of getting used to. The LeLit did not have a doser, rather you hold your portafilter up to the switch on the front of the grinder and release it when you have enough ground coffee. The Mazzer has a timer that you advance to start grinding. It deposits ground coffee in the doser hopper, and then you pull the lever (thwack, thwack) to deposit coffee in your portafilter. Both grinders are messy, but the Mazzer has the potential of wasting a lot more coffee due to the hopper requiring a certain amount of coffee to be present for semi-precising measuring.

3. The LeLit has suffered from clogging of the grinding chute. The Mazzer has not yet suffered from that though I’ve read of folks having this problem.

4. The LeLit very often suffers from clumpy coffee, and the Mazzer does also. Maybe it’s a static electricity thing. All I know is that it’s a annoying. Clumps in your espresso grind do not allow perfect pulls. You end up with channeling and imperfect shots. Since the Mazzer sells for almost three times as much as the LeLit you’d think that it would perform light years ahead of the LeLit. But in my mind, so far, the Mazzer does not live up to it’s reputation. I see a zillion reviews that give it very high marks. And yet this grinder is giving me clumpy espresso. Why?

As I read some of the grinder reviews on some heavily visited coffee centric websites I am starting to wonder about the honesty of these reviews. High-end Espresso Grinder Reviews, Mazzer Mini Grinder Detailed Review. All this praise for a “high end grinder”, and yet I find it to be an imperfect machine.
More to come….

This cafe is next to my work place. I pass by on a daily basis, and I usually don’t stop....

After buying a Breville BCG450XL Conical Burr Grinder to grind coffee for my family’s Miss Silvia Espresso Machine, and finding...

I very seldom come across a fresh bag of coffee that I don’t appreciate. Well, today I started pulling shots...